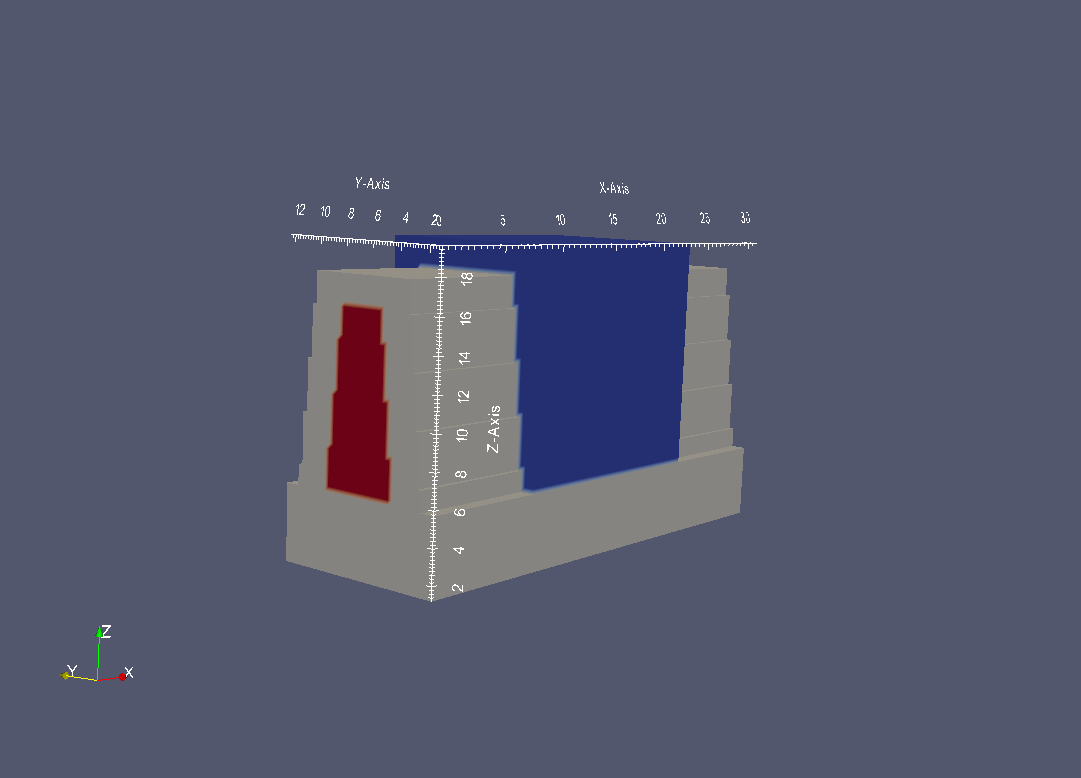 In this section we demonstrate some of M*’s capabilities by simulating the properties of a silicon fin field-effect transistor (FinFET).

FinFETs are employed as digital switches in modern integrated circuits where they have increasingly replaced planar MOSFET designs over the past decade due to their increased performance springing from the improved electrostatic control of the channel allowed by such designs. In this tutorial we simulate the electrical properties of a silicon FinFET with sub 10 nm geometrical features, and a gate length of 15 nm. With present technology nodes already comprised of similar device geometries at slightly larger dimensions, devices similar to the FinFET presented here may be a reality in the next few years.

M* performs device simulations based on fully quantum-mechanical electronic structure models in tandem with a non-equilibrium Green’s function (NEGF) approach for charge transport. M*’s implementation enables FAST simulation of device properties for quick turnaround design times; results presented in this section have been obtained in around 40 minutes using a single processor core on a modern laptop.

A schematic describing the geometry and doping profile of the device at hand is shown in figure 1. The device is comprised of a cylindrical [110] silicon NW with a trapezoidal cross-section with a top width of 3 nm, bottom width of 5 nm, and height of 10 nm. The gate electrode is electrically insulated from the channel by a 2 nm thick layer of high-κ oxide; a 15 nm long channel region is defined by a gate electrode surrounding the fin in a tri-gate architecture. The wide contacts acting as the device’s source and drain are not explicitly modelled as they are assumed to be far away from the device channel and have ideal contacts (i.e. ohmic contacts) to narrow lead extensions located on either side of the channel, as per the usual NEGF framework.

In order to account for electrostatic screening and its effects on the device’s electrical properties, we explicitly model portions of the lead extensions closer to the gate electrode. The required length of lead extensions to be explicitly modeled depends on the materials comprising the device, its geometry and doping profile; for this design all properties are converged for lead extension lengths of 8 nm. Regions coloured with varying shades of red in figure 1 highlight variations in the doping profile: the leads extensions are doped n-type to a free electron concentration of 3×1020 N / cm3 while the region under the gate emulates a doping concentration decaying into the centre of the channel: regions labelled (A) in the figure are doped to a carrier concentration of 5×1019 N / cm3, regions labelled (B) to 5×1018 N / cm3, and region (C) to 1×1016 N / cm3. 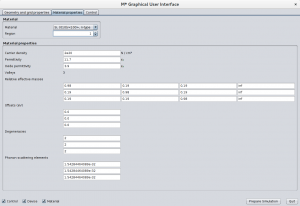 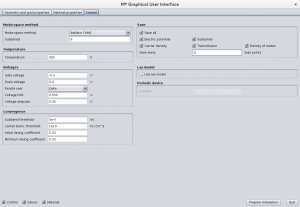 We neglect all sources of electron scattering and simulate the device in the ballistic regime, a reasonable approximation given its short gate length. This type of simulation quickly provides information on the device’s properties as defined by its geometry and intrinsic material properties, thus allowing exploration of performance limits when sources of scattering detrimental to device operation such as electron-phonon interactions are not accounted for.

Figure 3 shows the device’s transfer characteristics on semilog and linear scales for a drain-source bias of VDS = 0.4 Volts. A least-squares fit results in a predicted subthreshold swing (SS) of around 70 mV/dec, indicating switching characteristics between those of planar devices and nanowire devices.

In figure 3 we have highlighted in red circles three bias points corresponding to OFF, ON, and SAT (saturation) states which we take as representative of each device operation regime for exploring evolution of other quantities shown below.

Figure 4  shows the lowest subband in energy across the device when in its OFF state (green), ON state (yellow), and in saturation regime (red).

It can be seen how the barrier encountered for electrons coming from the source (left hand side in the figure) is reduced for increasing values of gate bias, thus allowing larger currents to flow through the channel. While the barrier induced in the channel region in its OFF state is over 300 meV above the source Fermi level ( ~15 × κBT at room temperature ) and severely impedes current flow,  the first subband lies below the source Fermi level across the whole device when in saturation regime so electrons can easily flow through it.

M* enables comprehensive analysis of simulated devices’ electronic structure by allowing extraction, visualisation, and overlaying a number of results such as of density of states, subband profiles, and transmission probabilities associated to each conduction valley and device region, as depicted in figure 5. 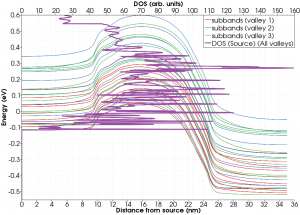 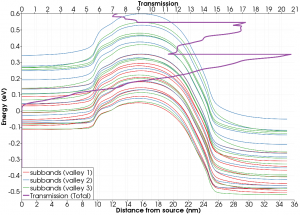 Figure 5: Subband profile, density of states at the source region, and transmission probability function for carriers in a particular conduction valley.

Additionally, you may plot the carrier density and electrostatic potential across the device as 3D grids for a better understanding of how they correlate and ultimately gain insight into device operation and design optimisation based on simulations based on quantum mechanical models.

To learn more about M*’s features and capabilities or to request a demo version,  don’t hesitate to contact us

This website uses cookies to improve your experience while you navigate through the website. Out of these, the cookies that are categorized as necessary are stored on your browser as they are essential for the working of basic functionalities of the website. We also use third-party cookies that help us analyze and understand how you use this website. These cookies will be stored in your browser only with your consent. You also have the option to opt-out of these cookies. But opting out of some of these cookies may affect your browsing experience.
Necessary Always Enabled

Any cookies that may not be particularly necessary for the website to function and is used specifically to collect user personal data via analytics, ads, other embedded contents are termed as non-necessary cookies. It is mandatory to procure user consent prior to running these cookies on your website.